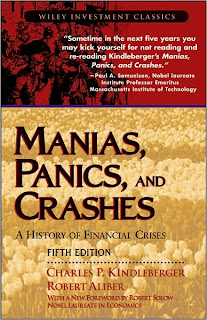 To be published in paperback 5th August 2011

Aliber has succeeded again, producing the eagerly anticipated next edition of this definitive guide to the financial crisis; highly respected by economists and academics across the globe.

The sixth edition of this bestselling classic on the history of financial crises over the last two centuries, explores the most recent events leading up to the financial crisis including the four waves of credit bubbles over the last thirty years. With polish and style, it analyzes the reasons behind each of these credit bubbles and why ultimately all of them have led to economic disaster. Updates include a chapter on Lehman Brothers.

‘Underneath the hilarious anecdotes, the elegant epigrams, and the graceful turns of phrase, Kindleberger is deadly serious. As he so effectively demonstrates, manias, panics, and crashes are the consequence of an economic environment that cultivates cupidity, chicanery, and rapaciousness rather than a devout belief in the Golden Rule.’ – From the Foreword to the Fourth Edition by Peter L. Bernstein, author of The Power of Gold

‘An easily accessible book, filled with fascinating historical vignettes.’ – Charles Goodhart, London School of Economics ‘Every so often financial markets fly off the rails of rationality. Manias, Panics and Crashes brilliantly explains these crises and warns us that as each one fades into the past, the lessons are eventually lost, and investors again come to believe that trees grow to the sky.’ – David Laibson, Harvard University

CHARLES P. KINDLEBERGER was the Ford Professor of Economics at MIT for 33 years. He was a financial historian and prolific writer who published 30 books.

ROBERT Z. ALIBER is Professor of International Economics and Finance Emeritus at the University of Chicago Booth School of Business. He writes extensively about currencies and international monetary issues.

Praise for the previous edition:

‘Charles Kindleberger has written, with great polish and style, an analysis of the stages of financial crises over the last two and a half centuries.’ – Patrick Minford, Economic Journal

‘Manias, Panics and Crashes is a scholarly account for the way that mismanagement of money and credit has led to financial explosions over the centuries.’ – Richard Lambert, Financial Times

‘Professor Kindleberger has the welcome gifts of carrying lightly an immense weight of learning and of always using his imagination in deciding how to deploy it. These gifts are as evident as ever in his latest book.’ – W.Ashworth, Economic History Review

‘Robert Aliber has produced a superb update of the classic book by Charles Kindleberger which remains as relevant as ever.’ – Martin Wolf, Financial Times

‘…if what you’re after is a comprehensive guide to financial crises since the dawn of the modern era, buy Charles Kindleberger’s Manias, Panics and Crashes: a History of Financial Crises…an excellent read.’ – Edmund Conway, The Telegraph