A long-time client asked what we thought about a recent Journal article that suggested weak future equity returns based on Robert Shiller’s cyclically adjusted price/earnings (CAPE) ratio. Here’s our reply:

First, a caveat.  Since our mandates are always to be fully invested, we don’t really focus on asset allocation.  Please keep that in mind as you consider this email.

In some ways an Earnings/Price ratio approximates a real discount rate , 1/CAPE should be roughly comparable to the real Cost of Equity Capital that Ativo measures on an onoing basis. Here’s a plot of the two series.  (Click on the chart for higher resolution.) They obviously parallel each other to a high degree, which isn’t surprising since both depend on price and some inflation-adjusted measure of earnings.  The question is what the two series tell us. 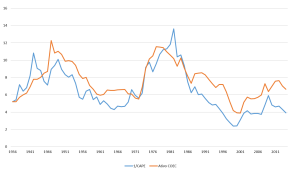 The Journal article bases its caution on the long-run average of the Shiller data.  Ativo’s approach compares COEC not with a long-run average, but with where the COEC should be, given inflation and tax policy.  But even if you take the Shiller approach, today’s 1/CAPE is still higher than the 1995-2000 period, and is consistent with the 2000-2007 (pre-crash) period.  This clearly isn’t a screaming buy signal, but it’s no worse (and sometimes better) than the 1996-2007 period.

One other observation: Visual inpection suggests that the Ativo’s COEC is currently about average compared with the long-term, even though 1/CAPE is at the low end of its range.  “About average” isn’t a screaming buy signal, but the difference does raise some questions about how much faith to put in the CAPE.

One major difference between the two series is that Shiller’s earnings component uses the average of the past ten years, while Ativo’s is based on current performance.  Therefore Ativo’s COEC will tend to be higher when earnings are rising.   To the extent you think the absolute levels of current earnings are too high and will fall back to a ten-year average level, then the Journal’s interpretation (blue line, low COC, high current multiple) has some merit.  But if you have any degree of confidence that earnings will exceed the ten-year average, then a more optimistic story (brown line, modest COC, average current multiple) makes more sense.

I hope this helps.  Best wishes for the new year.